The choice to retreat from battle or abandon an expedition entirely is almost always available to the player. Due to the unwholesome mechanics of the game, it will be not uncommon to retreat.

Basically, after you beat the Darkest Dungeon, it closes up shop but you can still do 'fun runs' in the weald, warrens, cove and ruins. You can still use that save file as much as you want so there's no 'game over' that bars you from using your end game stuff. Darkest Dungeon® - Steam WorkshopNow includes Steam Workshop integration! Download mods made by the Darkest Dungeon community or create your own and tweak the game to your liking. You can find new hero classes, monsters, treasures, UI improvements, and more in the Workshop!Just UpdatedRecently updated with all new RADIANT MODE. Radiant Mode reduces the time to complete the game by almost 50%. Aug 21, 2020 The Darkest Dungeon is a hellish pit filled with eldritch horrors, and those who worship them, that goes all the way down into the Heart of the World itself. To beat the game, you need to complete 4 quests in this location. The music that plays during combat in the Darkest Dungeon is The Final Combat. Darkest Dungeon - The Crimson Court is the first full piece of DLC for Red Hook's Darkest Dungeon, a gothic roguelike dungeon crawler released after an extended early access period.

To retreat from battle, click on the white flag on the top left corner. You can only interact with the retreat option when it is your hero's turn to act in combat. Retreats are not guaranteed to work when desired and will act like a turn skip. There are few things to keep in mind before attempting to retreat:

If your ‘Darkest Dungeon’ game is freezing on the loading screen just after you load your previous safe then this may indicate that either there is a fault with your hard drive or with the save file itself. It is an annoyance but save files can become corrupt if you turn off your console while it is saving your progress.

To abandon an expedition, click on the 'x' button on the top left corner. You can only abandon a quest when your heroes are out of combat. Abandoning a quest will always be guaranteed, but similar negative effects to retreating will occur:

This article or section may contain spoilers about the final boss. You might want to avoid reading further if you don't want to spoil the surprise for yourself!

The Heart of Darkness is the final form of the final boss of the Darkest Dungeon. Classified as COSMIC, it has a terrible ability called Come Unto Your Maker, which instantly kills a hero - regardless of HP or stress. The player must select which one of your heroes dies, meaning you have to be strategic as to who should stay and who should die.

The Heart of Darkness is the final phase of the Ancestor fight, symbolizing the pinnacle of his ambitions, and represents the embodiment of the mystical forces that were responsible for the corruption of the Hamlet and its surroundings. In true Lovecraftian style, it is a slumbering, ethereal, and omnipresent deity manifested through your Ancestor's misdeeds, whose form became a vessel for the creature to cross over. It is the being that is revered by the cultists and priests of the Darkest Dungeon who have, under the influence of its cosmic power, become distorted entities of multiple mouths, eyes, and tentacled appendages. So terrible is its influence that the inhabitants of the Hamlet will appear momentarily disfigured in similar fashion to the Darkest Dungeon fiends after the first mission is completed.

Come Unto Your Maker[edit | edit source]

Although it may seem that the final boss wantonly decides to make one of your party members instantly die, the skill 'Come Unto Your Maker' will always trigger on two instances if the conditions are met:

That means that after your characters inflict a blow that reduces the boss' HP under said thresholds, he will immediately deal a deathblow to one or more of your party members on his next turn[1]. It should also be noted that stunning is also not an effective prevention method.

There is only one way to stop the Heart of Darkness from using the ability, which is detailed in 'Surviving Come Unto Your Maker'.

Each one of these skills inflicts a different status ailment. 'Know This', being a stress attack, will prioritize already stressed-out heroes, while the other two are based on your Heroes' resistances:

As mentioned above, this fight will get progressively harder as you reduce the enemy's HP and therefore lose more party members. The exact amount of HP for every one hit KO are 170 and 83 HP. Although it is impossible to exactly predict the exact amount of damage your heroes deal, it should be in your best interests to make the member who is about to be sacrificed deal the last blow to optimize damage output. Beware that if the HoD reaches the HP threshold on its turn due to DoT, it will still cast 'Come Unto Your Maker'.

Another thing worth noting is if you kill the previous phase instead of letting it shift to the final form, the excess of damage dealt to that form will carry over and be dealt to the Heart of Darkness, thereby starting the fight effectively with less extra HP.

If you are using healers or other support characters like a buffing/stress reducing Jester, it would be advisable to let them die first, while letting your main damage dealers focus on the Heart of Darkness for the second and third parts of the fight.

In essence, this is pretty much a rush-down boss-fight. You will want to deal as much damage as fast as possible, especially during the last third of the fight where you will only have 2 heroes available. Skills that benefit from marking are therefore invaluable for dealing high amounts of burst damage.

During the early portion of the third part of the fight, you may want to consider healing up/reducing the stress on afflicted heroes, as his attacks, while powerful, will not usually put your characters immediately on death's door. Due to the Heart of Darkness's relatively low Stun resistance, this would be an ideal time for stalling time and recovering.

Considering this boss's mechanics, you may make your last heroes have lower bleed than blight resistance, as his blight attack can also trigger the stun effect.

The Heart appears to restore one action by killing anyone by other skills than 'Come Unto Your Maker'. This may be a glitch.

As the battle progresses, you should become more aggressive, since this is the last mission and no retreat is possible. Moreover, the fewer characters you have, the less you will be able to keep up with the Heart of Darkness's onslaught.

If you manage to defeat the Heart of Darkness, congratulations! You will be greeted with a cinematic epilogue and have beaten the game.

Good luck and keep your guard up!

As it is used at 2/3 and 1/3 health, with careful manipulation of the boss's mechanics, it is possible to circumvent Come Unto Your Maker if you can destroy the Heart in one fell swoop before it reaches one of those HP thresholds. The best way to do this is to equip powerful +DMG and/or +CRT on someone that can hit extremely hard (Leper is ideal), whittle the Heart down to 2/3 or 1/3 health, while stacking buffs on a hard hitting character, or stack defence-reducing debuffs on the Heart, and then hit them for one massive, shattering blow.

While saving one character by surpassing the second Maker is relatively trivial, saving everyone is far, far harder. It requires absolute precision calculation, best in slot gear, and a lucky crit to have all four of your characters walk out alive, and if you fail, you will likely endure back-to-back instant deaths from pushing the Heart to low HP. The first documented instance of an 'Everybody Lives' was achieved by three Plague Doctors stacking Emboldening Vapours on a Leper, while the Leper stacked Revenge on himself, resulting in a 268% damage buff and obliterating the Heart with a fatal critical hit of 173.

The second way of achieving this incredible goal is documented in this video, done by buffing the Jester with two Plague Doctors, one Man-at-Arms and four uses of Shard Dust, resulting in a destructive 199 damage critical hit.

It is also entirely possible to embark on this quest with just 2 characters to prevent Come Unto Your Maker completely, however it would make the Ancestor fight much harder. In order to accomplish this, you're going to need your heroes to be able to heal each other and still do high enough damage to prevail, which is much harder with just 2 characters, but it is possible, such as with the Hellion and the Flagellant, using the Flagellant for healing damage and stress, while using the Hellion as the main damage output. Such a feat was demonstrated by youtuber Fourtwoflow, who also defeated the HoD with a Leper and a Crusader, two heroes who can heal themselves and inflict high damage; the task was heavily aided by the presence of virtues, which was induced by Hero's Rings and the Valiant Spirit town event (65% virtue chance, though the Crusader can reset stress to 0, should an affliction be drawn instead of a virtue). This method is, oddly enough, less luck dependant than bringing the entire 4-man party. It is also possible to beat the Heart with the Houndmaster and the Flagellant, having the former constantly guarding the latter and dodging almost all hits, while the second stage AoE attacks will still hit the Flagellant and make him use his low HP skills. Another possible 2-man party capable of defeating the Heart consists of the Crusader and the Highwayman, with the Crusader as the main healer and de-stresser and Highwayman as the main damage dealer, especially thanks to his riposte. Another method is using a Man-At-Arm together with another hero which is preferably a damage dealer who can deal damage from rank 1 or 2, both should have at least 30-40 dodge, and buy all the shard dust. By using shard dust to refresh and stack Bolster buff, both heroes can get up to 100+ dodge. Be wary though, using shard dust bulids up high amount of stress even with Bolster stress buff, and a few turns are needed to stack Bolster, so the second hero might need to have healing ability and Man-At-Arm should never join darkest dungeon quests before (in Radiant Mode). 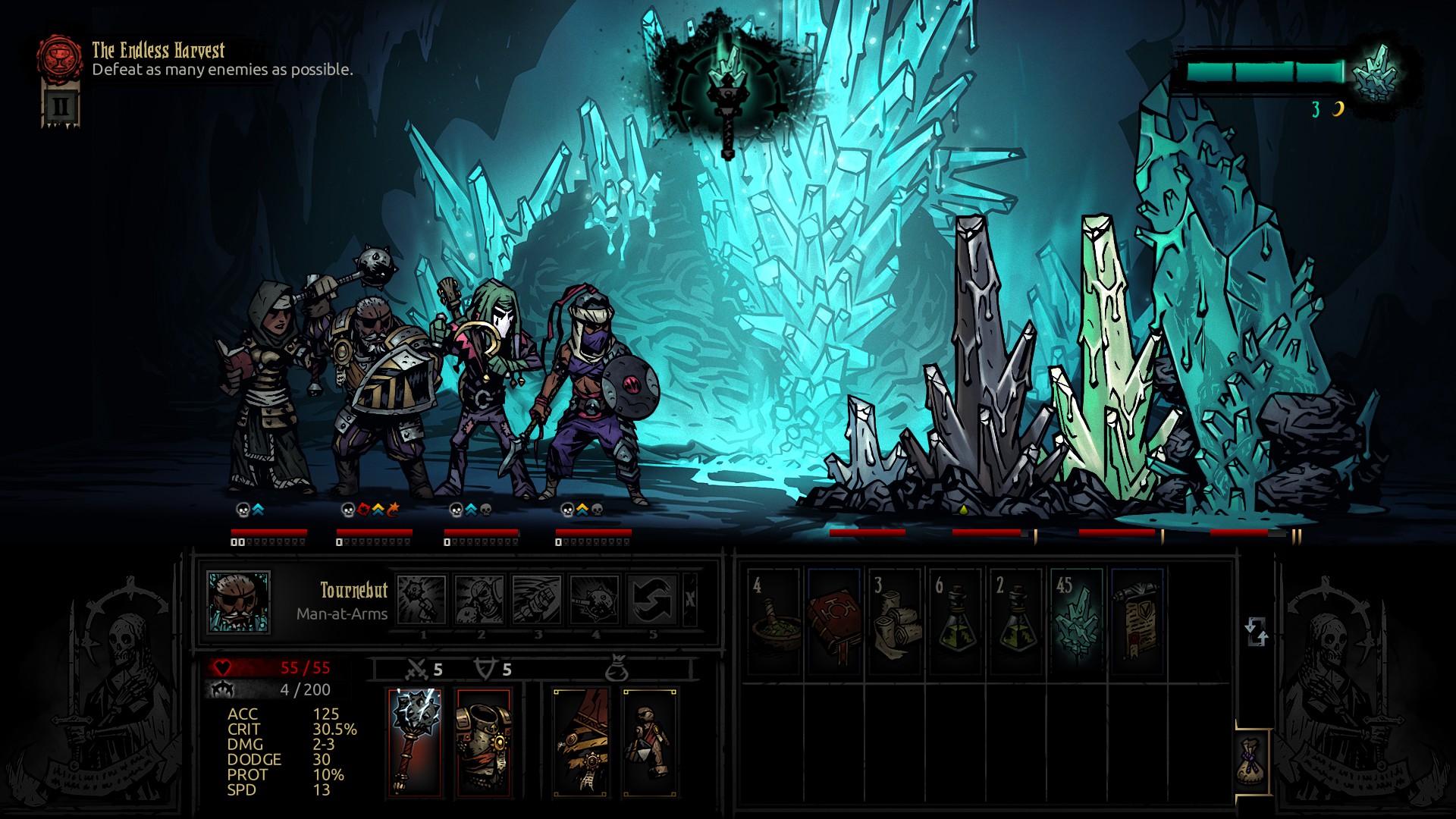 See All Results For This Question