Even if you’re not much of a fan of Kel-Tec, there’s a good chance you’ve seen, or at least heard of their folding pistol caliber carbine, the Sub-2000. With an MSRP of $409, the Kel-Tec Sub 2000 is an inexpensive alternative to AR-15s and pricier “tactical” rifles for someone on a budget. But if you’ve looked around for one lately, you may have noticed that the Sub-2000 is pretty tough to come by. And if you do happen to find one for sale, the price will most likely be closer to $500 for the .40 S&W version, and 100 bucks more for 9mm.

Before we start trying to figure out why a funny looking rifle from a company with a dubious reputation is in such high demand, here’s a quick overview of the Sub-2000 to get you up to speed:

Okay, so it’s probably pretty obvious from the video that I’m not the biggest fan of the Sub-2000. To be honest, I don’t actually hate the rifle, and I hold no ill will toward Kel-Tec, even if I think the Sub-2000 has some pretty obvious faults. I actually think some of the modified Sub-2000 rifles out there are pretty cool, especially when paired with the Red Lion Precision rotating forend.

But once you pay for all the extra do-dads to upgrade the Sub-2000 so that it has the same features and usability that most self-defense carbines give you out of the box (accessory rails, usable sights, stock cheekpiece, optics mounting solution, etc), you’ve kind of negated the low price point advantage to some extent. Since people seem so willing to pay well over MSRP for this rifle, it can’t be the low retail price that’s attracting people to the Sub-2000. So I did some poking around to see if I could find out from fans of the Sub-2000 what the mystery is behind this rifle that’s keeping demand so high, and I think it boils down to four main reasons: 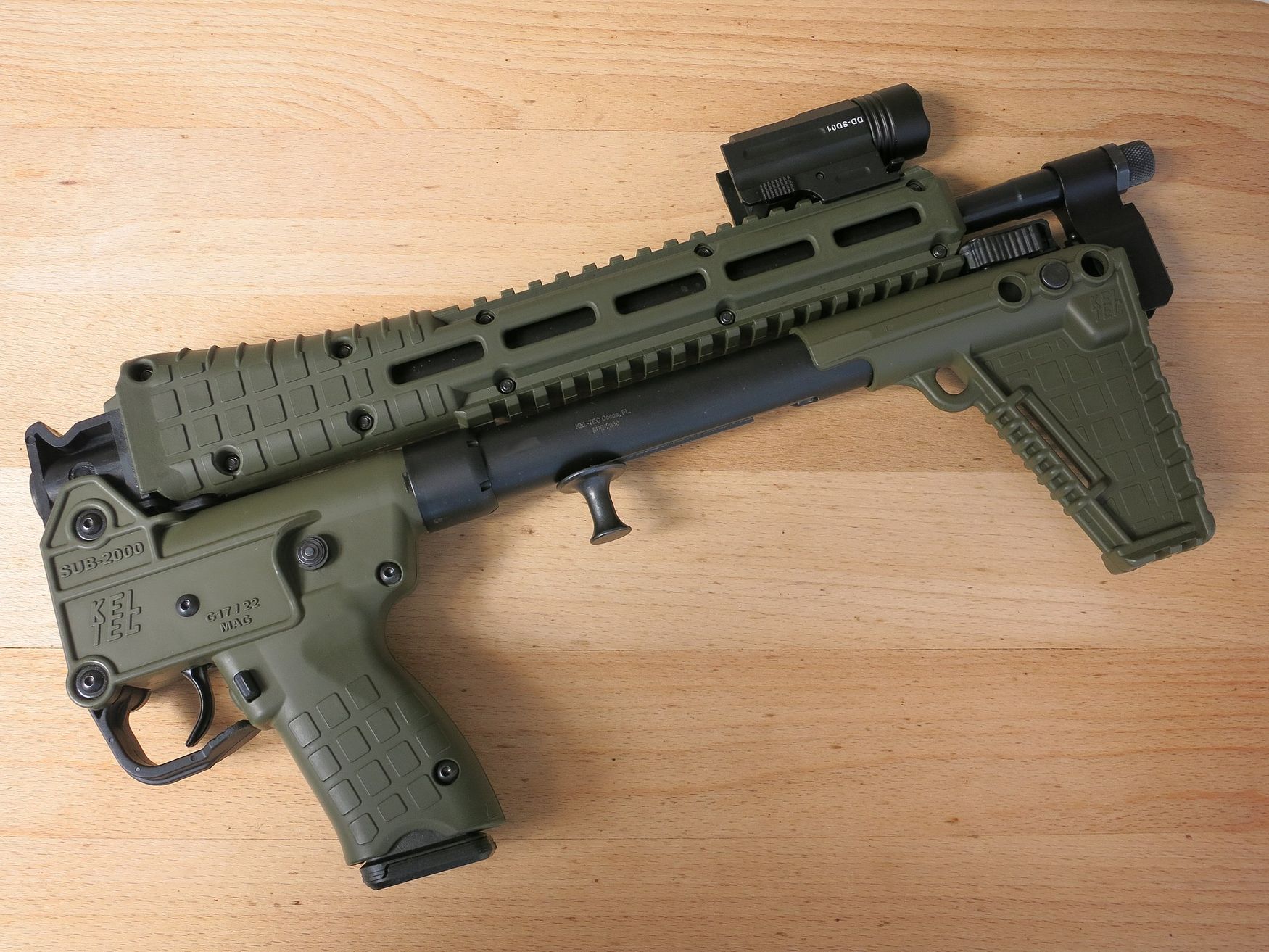 Okay, forget all that stuff about the price not being the big selling point. Despite high demand driving up prices on the secondary market, the Sub-2000 still occupies an important niche in the market.

There aren’t a ton of options available for semi-auto pistol caliber carbines, especially if you stick with current production models. The ~$250 Hi-Point 995 Carbine is at the low end of the price spectrum, but it might actually be even uglier than the Sub-2000 and… well, it’s a Hi-Point. On the other end, there are high-dollar offerings like the Kriss Vector and FN PS90 that cost more than a fully equipped top-shelf AR-15, or the Colt AR9651 which basically is an AR-15, with the price tag to match. Somewhere in the middle is the Beretta CX4 in the $700 range. There are a few other obscure options from smaller companies, and some out of production carbines, but that’s just about all there is from the major manufacturers.

Even with an inflated aftermarket price, the Kel-Tec Sub 2000 offers an attractive mid-range option that’s been left vacant ever since Marlin ended production of their Camp Carbine in the late 90s and Ruger stopped making the Police Carbine in the last decade. With a price tag anywhere from $350-600, it’s high enough that buyers feel like they’re out of the sketchy “bargain basement” territory, but low enough to be more affordable than even a budget-level AR-15.

For reasons known only to Gaston Glock himself, there is still no official Glock carbine on the market, despite plenty of demand. In the absence of a Glock-made carbine, Kel-Tec has given Glock pistol owners another use for their scores of affordable magazines with the Sub-2000. And if you’re not a Glock fan, fear not. A second version of the Sub-2000 is available that can be adapted to accept either the plentiful Smith & Wesson 59-series magazines, Beretta 92/96 series, or Sig P226 mags. And if you’re willing to tinker around and experiment, I’m sure there are plenty of other magazine types out there that will fit into the mag well of a Sub-2000.

By taking advantage of the magazines that customers already have for their handguns, the Sub-2000 side-steps one of the largest contributors to the overall cost of ownership of a new rifle. Instead of waiting for Glock to put out their own carbine, it makes sense that some people would be willing to pay a few bucks over retail for a Sub-2000 that will use mags from their pistol of choice.

In last Tuesday’s post, I talked about the usefulness of takedown rifles. The Sub-2000 technically isn’t a takedown, but the ability to fold it in half offers many of the same advantages. It also doesn’t hurt that folding and unfolding the carbine is extremely quick and easy to do.

I’ve been aware of the Sub-2000 for years, but I didn’t really “get” the appeal of this feature until I handled one in person. When folded, it’s super compact. It could fit in my laptop bag, even with the laptop already in there. I have no reason to actually do this, but if I had one of these rifles, I’d be trying to find an excuse to, just because I could. Say what you want about the Sub-2000’s looks, or Kel-Tec’s reputation, there’s no other pistol caliber carbine on the market that can do this.

The final and most obvious reason for the inflated prices of the Sub-2000 is simple supply and demand. Kel-Tec just isn’t making the Sub-2000 fast enough to keep up with the demand from customers. The same can be said for their PMR-30 pistol or KSG shotgun and several of their other products. This article does a great job of explaining the why behind Kel-Tec’s constant lag in output. It basically comes down to the fact that the folks running Kel-Tec refuse to go into debt in order to increase their production capacity. Because today’s demand for their products could vanish the moment they take out a big loan, they’ve decided to wait until they have the cash on hand before doing any major expansions. They have been building more facilities and hiring more staff, but this policy slows expansion plans dramatically, further contributing to the lack of supply of their more popular products.

So there you have it; there’s no conspiracy or secret plot to artificially drive up the market price on the Sub-2000. It’s just the result of simple economic principles at work. I’m not saying you should buy one… I’m not even saying you should like it, but the Sub-2000 is a truly unique little carbine. After spending some time with one, I definitely understand the appeal, and if I didn’t already own a 9mm carbine (Beretta CX4), I have to admit that I might be tempted to join the scores of buyers paying 25% over retail.

Performance Services is a specialist in manufacturing Kel Tec Sub 2000 accessories and has been selling them for years under the name Earley on http://www.gunbroker.com/

We are always striving to create new ways to improve your favorite tools and toys (if there is a difference) and are willing to turn your ideas into reality.

Performance Services was founded from our passion of GP motorcycle racing. Producing competition bred parts and modifications with the goal of winning races. Our love of competition and winning also led us to shooting sports where our passion to improve continues. We are dedicated to never accepting good, as good enough. There is always room for improvement. All of our products and services are focused on improving your favorite equipment and the experiences you have with that equipment. 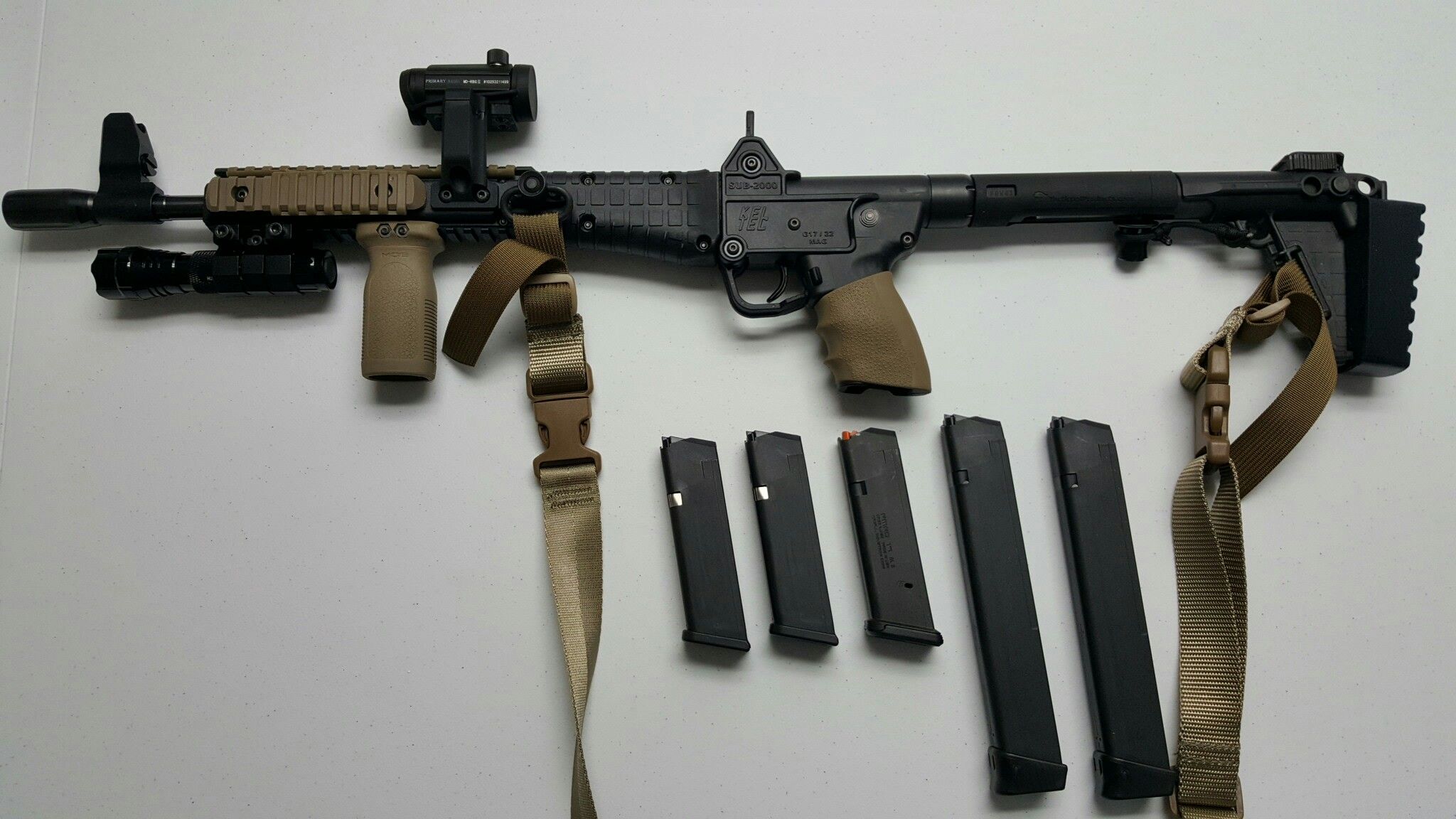 Performance Services is not confined to the arena of competition and has over 35 years experience in machining prototype and production components for all arenas, including aerospace, military, oil/gas exploration, precision photography/optics, motion control/industrial automation, and anything custom for any application.

Let Performance Services help you realize your goal of building the best.