Save those piddling electronic action scores for mere mortals. For if there’s one composer who’s brought down the symphonic thunder of the composing gods, then his name would be inscribed as Patrick Doyle. Receiving his musical and acting education in his native Scotland, Doyle’s dual artistic threats would strike up a winning collaboration with Kenneth Branagh, whom Doyle beat for an actual billing when both starred in CHARIOTS OF FIRE. But Branagh would scantly toil in the background for long, as his theatrical flair allowed him to take a 9 million dollar gamble behind, and in front of the camera with 1989’s HENRY V. Doyle’s natural talent for trumpeting, orchestral melody (not to mention his award-winning way with Latin choruses) sounded him off like a lightning bolt- a storm that was about to explode when he and Branagh went Hollywood for 1991’s stylistically dazzling romantic thriller DEAD AGAIN.

The two decades since have seen Branagh and Doyle collaborate on over a dozen films, from the Shakespearean lyricism of AS YOU LIKE IT to the Oscar-nominated royalty of HAMLET, as well as the eccentrically jazzy murder games of SLEUTH and the bombastic thrills of FRANKENSTEIN. Though he’s played it smaller for such scores as BRIDGET JONES’ DIARY and the Oscar-nominated SENSE AND SENSIBILITY, Doyle’s most entertaining scores have always involved a surfeit of melody, whether it be the breathless crime thrills of CARLITO’S WAY, the rustic fantasy of SECONDHAND LIONS, THE LAST LEGION’s noble Roman adventure, or neatly fitting into the fantasy world of HARRY POTTER AND THE GOBLET OF FIRE.

It’s seems almost amazing that Doyle hasn’t scored a comic book blockbuster, let alone survived in the relentlessly youth driven world that’s sent many melody-heavy old-school composers to The Phantom Zone. But Doyle’s a survivor (quite literally when it came to overcoming a bout with cancer), more than possessed of the heroic lifeblood to take on the challenge of Branagh’s THOR. But then with their background in high theater, these Warriors Two are exactly the right men to take on Marvel’s most fantastical superhero, especially when he and his godly relatives are traveling between the Nordic heaven of Asgard to the backwater planet of Earth via a Rainbow Bridge.

Where the English-born Branagh delivers on the Kirby-an thrills, Doyle employs his powerhouse sound for a score that blasts both cosmic nobility and humanity, hitting all of the propulsive VFX notes with the lush grandeur that is the composer’s birthright. Yet for characters a few millennia old, Doyle’s solidly thematic approach is unusually fresh, with a symphonic rock fusion and rhythmic pulse that’s very much part and parcel of today’s pop-rhythm driven action scores. Yet Doyle has sacrificing none of his lush blood and thunder in the bargain. If anything, the sounding majesty and contemporary action stylings of THOR just might have herald Branagh and Doyle’s next Hollywood big Hollywood step two decades after DEAD AGAIN with its visual and aural grandeur.

Now taking a brief break as he dodges the simians of his next effects blockbuster RISE OF THE PLANET OF THE APES, Doyle talks about capturing the glory that is the Marvel Universe with THOR.

THOR is your most high-profile work yet with Kenneth Branagh. Were you at all daunted when he approached you with your first blockbuster superhero score? And was there any convincing that had to be done with Marvel to give you this shot?

It is the most commercially high profile film I have done since FRANKENSTEIN. But I was not daunted, as I have great trust in our working relationship. I’m a huge fan of science fiction, mythology and especially all of the Marvel films, so it was very exciting to get the chance to score THOR. I understand Kevin Feige, who is the head of Marvel, liked my music and he and the studio was very happy with Ken’s choice.

Were you at all familiar with THOR’s universe before taking the movie on? And if not, did you grab a bunch of comic books before scoring began to immerse yourself?

I am very familiar with the Thor universe, as it is all part of a mythology that includes Wagner’s Ring cycle and the Scandinavian musical culture where Thor springs. It is very intertwined with my own Celtic background, which has its own mythology.

Could you tell about Kenneth views the role of film music, particularly in a fantasy epic like THOR?

Ken wanted the score to have a contemporary feel, which I concurred with. I was also eager for the score to contain a strong sense of melody, which he responds to in my work. He was keen, as indeed I was, that the grand images were not in any way hyperbolized, and that there would be a balance between playing with, and against the images.

Do you think there’s a commonality to the “superhero” score? And how did you and Kenneth want to make the movie, and music of THOR stand out from them?

I suppose the main challenge in THOR was to come up with a superhero theme, and the main theme that represents Asgard, the home of Thor, I wanted the latter to come across as an old folk song from a Celtic world, which, as I mentioned before, I was raised in. This melody had a development that became the traveling, action and fighting theme. Everyone responded very well to these two themes in addition to the theme that represented the world of Jotunheim. It gave me enormous satisfaction, as this brand new comic book to film hero gave me this kind of free thematic palette.

With all of Thor’s family problems, do you think there’s a Shakespearean quality to this saga that ties into your earlier work with Kenneth?

Thor’s family problems, in Asgard as well as on Earth, are (pardon the pun) universal. There are many family dilemmas in Shakespeare’s plays, especially in King Lear, Hamlet, As You Like It and Macbeth.

How do you musically see the character of Thor?

We recognize Thor is a god. He is a big personality. He is a big person physically and the last thing to depict Thor would be a delicate piccolo! Clearly his world requires a slightly more robust set of musical instruments: horns, low brass, slow strings etc. He is a passionate creature, brave yet sometimes weak (especially in his human form). There is a sense of longing for home and remembering Asgard, which I featured particularly with the haunting quality of the Cor Anglais, which also captures Thor’s pathos and nobility.

How did you want your music to distinguish the realms of Earth and Asgard?

It was very tricky moving from Earth to Asgard. Broader orchestral strokes and thicker orchestration helped to depict the grandeur and beauty of their world, whilst the music for Earth was much more contemporary, electronic and percussion driven.

At the beginning of your career in the arts, you were likely as busy an actor as a composer. Do you think being in front of the stage, and camera brought you a unique appreciation with how music affects performance, especially in a film like THOR where it’s a challenge to make oneself stand out amidst the effects’ sound and fury? 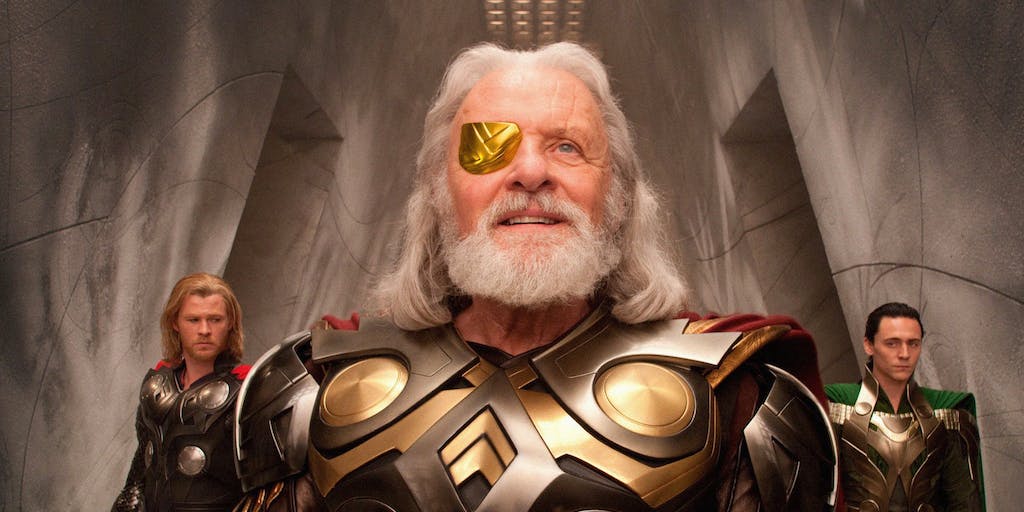 I’ve always been aware of music and dramatic music in my love of opera and theatre. Having a formal classical music education consolidated a greater understanding of the technique of music and drama. My experience in theatre, as a composer and actor was the further study of both crafts and how they intertwined. There are many fine composers with no acting experience, so being an actor is no pre-requisite for the job! My work in THOR was not to stand out, but rather to be part of the greater whole, just like the genius Wagner intended music and all the art forms to be.

Did Marvel Studios have any input to the score?

Marvel Studios have a brand in THOR. Their interest, like mine, was for strong thematic material that would capture the essence of that brand.

A lot of composers who reveled in hugely thematic orchestral scores have unfortunately been left in the dust. What’s the key to creatively surviving in this business with top-ranking movies like THOR and HARRY POTTER?

I think the use of symphonic music in film will survive as long as we have great epic stories. One has to be aware of the constant ebbing and flowing of musical trends, for example, the use of ostinati figures, which is the musical zeitgeist. I used the opportunity of THOR to take this device and intertwine it in a symphonic way whenever appropriate.

Having battled your own way through a dire threat that would give even Thor pause, do you think the experience brought a new vitality, and determination to your work that’s reflected in this score?

With regards to my own personal battle with Leukemia, I think most people given my circumstances with a family to live and care for would have fought as hard as I did. It most certainly changed my attitude in many ways. I have far more energy and vitality. I am just as determined to do the best work I can, and I suppose what it did give to me was a perspective on what is far more important in life. I think anyone with the same experience would have come to the same conclusion. I loved the challenge of THOR, and I will always strive to write the best work possible.

Your next movie will be another effects film with an equally legendary “hero” for THE RISE OF THE PLANET OF THE APES. Could you tell us about your approach to the score? Will it tonally reflect the primitive quality that such composers as Jerry Goldsmith and Danny Elfman have brought to the saga?

I can’t really talk of my music for APES, because it is still very much a work in progress. But hopefully my score will bring a fresh musical approach to the franchise. With regards to being compared to other composers involved in the franchise, I think that will inevitably take place!

As all of the Marvel films link into each other, how do you see yourself continuing in that Universe, especially with the THOR sequel that’s already been announced?

No one knows what is ahead of us in the universe of life and music, I like to let the universe look after me! I am just extremely grateful to have been asked by Marvel Studios to compose the music for THOR.

Is there a favorite superhero from any comic company that you’d like to score?

I am thankful to have scored for a movie with a character as iconic as THOR, in a film directed by one of my closest friends, Kenneth Branagh. What more could a composer have asked for?
THOR opens on Friday, May 6th, with its soundtrack available on Buena Vista Records here