In 1974, Quincy Jones, who already had a wide range of musical credits behind him, opted to enter the R&B mainstream by hiring vocalists and overseeing recordings in a commercial vein released under his name. The first of them was Body Heat, which went gold, and Jones followed with a series of records including 1981’s million-selling The Dude and the 1990 Album of the Year Grammy-winner Back on the Block. Meanwhile, he switched record labels, leaving A&M for his own Warner-distributed Qwest in the early ’80s. That has tended to make the assembly of a comprehensive best-of difficult, but Universal’s Hip-O reissue division specializes in licensing material from other labels to construct its Ultimate Collection releases, and this one borrows seven out of 18 tracks from Qwest to add to Jones’ A&M hits, making it the definitive one-disc compilation of Jones’ pop/R&B recordings of 1974-1999. Jones himself participated in the selection, which does not strictly follow chart rankings, since a couple of R&B Top 20 hits (“I Don’t Go for That” and “Slow Jams”) are missing, while a few non-chart items are included. To get more songs in, the singles edits have been used in many cases. But all the major hits are here. The chronological sequencing allows an appreciation of how Jones’ approach changed over the years. The ’70s stuff, which holds up surprisingly well, is tasty R&B, much of it groove-oriented, up-tempo music. By the late ’80s, however, there are a lot of big, bland ballads that showcase superstar vocalists (Ray Charles, Barry White, etc.) and sound self-important. Like his protégé, Michael Jackson, who went from the rocking “Billie Jean” to the messianic “Man in the Mirror” in the same period, Jones seems to have begun believing his press clippings, and his work suffered accordingly. 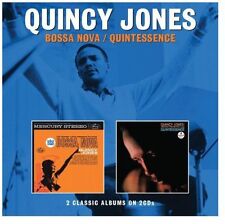 Quincy Jones Is How Old