Wheeler & Wilson's No. 9 machine was introduced in 1887 it was designed for Family use with its high arm it was advertised as 'The Only Perfect Sewing Machine for Family Use'.
No. 9 machines use the same bobbin mechanism as the No. 8 and very early examples have the stitch length adjuster on the pillar which was subsequently relocated to the bed and the design of the No. 9 then remained largely unchanged until the introduction of the D-9.
In 1895 the D-9 was introduced which adapted the mechanism of the No. 11 manufacturing machine. Externally the most obvious difference was the hand appliance which was more compact. In Great Britain the D-9 was primarily sold as a hand machine although it could be used with a treadle. Following the initial launch of the machine the company seems to have dropped the 'D' and simply advertised it as the No. 9.
After Singer's take over of the Wheeler & Wilson Manufacturing Company in January 1907 the D-9 was produced under the Singer brand name as the 9W until at least 1913.
Follow this link to a FREE copy of the Wheeler & Wilson No. 9 (D-9) Manual 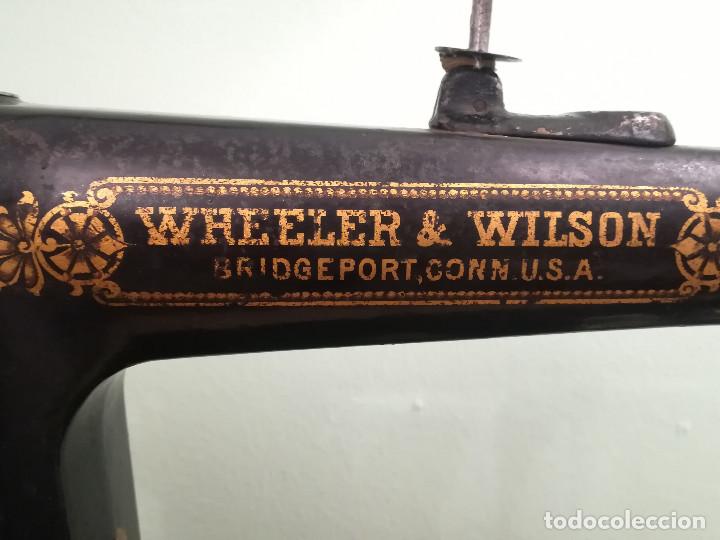 The Wheeler & Wilson Company long since came to the conclusion that the rotary movement is the true mechanical principle for manufacturing machines and most experts hold that this is also true as regards family machines. The Company, as is well known, have always been in favour of the rotary principle and apparently intend to stand by it. Allen Wilson started one of the world greatest sewing machine manufactures and is credited as making the first practical patent in November 1850. Wheeler successfully managed the firm till his death in 1893 and perhaps this was the reason for this last model D to be sold before being bought out by Sears in 1905. This model then become the Singer W9.

A young Allen B Wilson constructed his first practical sewing machine in 1850, using a rotary hook mechanism. It worked very simply and very quietly. Turning the hand crank caused the bobbin to rotate in circles and during each revolution a hook picked up the top thread from the needle and twisted it with the thread from the bobbin to produce a stitch.

During an exhibition in New York, Wilson was introduced to the older Nathaniel Wheeler, who was at the time manager of the firm Warren, Wheeler and Woodruff of Watertown, Connecticut. They formed a partnership under the name of The Wheeler, Wilson Company to manufacture Wilson’s sewing machines. In 1853 the name was changed to the Wheeler & Wilson Manufacturing Company and a few years later it moved to a new factory in Bridgeport, Connecticut.

To start with production was slow, however by the early years of the 1860’s it had increased from 20,000 to 30,000 and then 50,000 machines, peaking a decade later at over 128,000 per year. The company produced several models targeting specialist industrial work. As the Wheeler and Wilson Company launched new models, they issued them with numbers rather than names, clearly visible on the pillar. When the company changed from manufacturing machines with curved needles to new straight needle models they re-numbered the models. However some of the numbers were repeated i.e. the old machine model known as No. 5 became the new No.2.

The Wheeler and Wilson Company won several Prize Medals for their machines. These included the Industrial Exposition in Paris in 1861, the International Exhibition in London a year later and the Exposition Universalle in Paris in 1868, 1878 and 1889.

The Model 8 was the first domestic sewing machine made by Wheeler and Wilson in large numbers. In total approx 600,000 were are thought to have been produced over an 11 year period.

In 1888 the model 8 was replaced with the model 9, which was itself later upgraded in 1895 to become the D9, and then finally the Singer 9W after Singer took over the company in 1905. 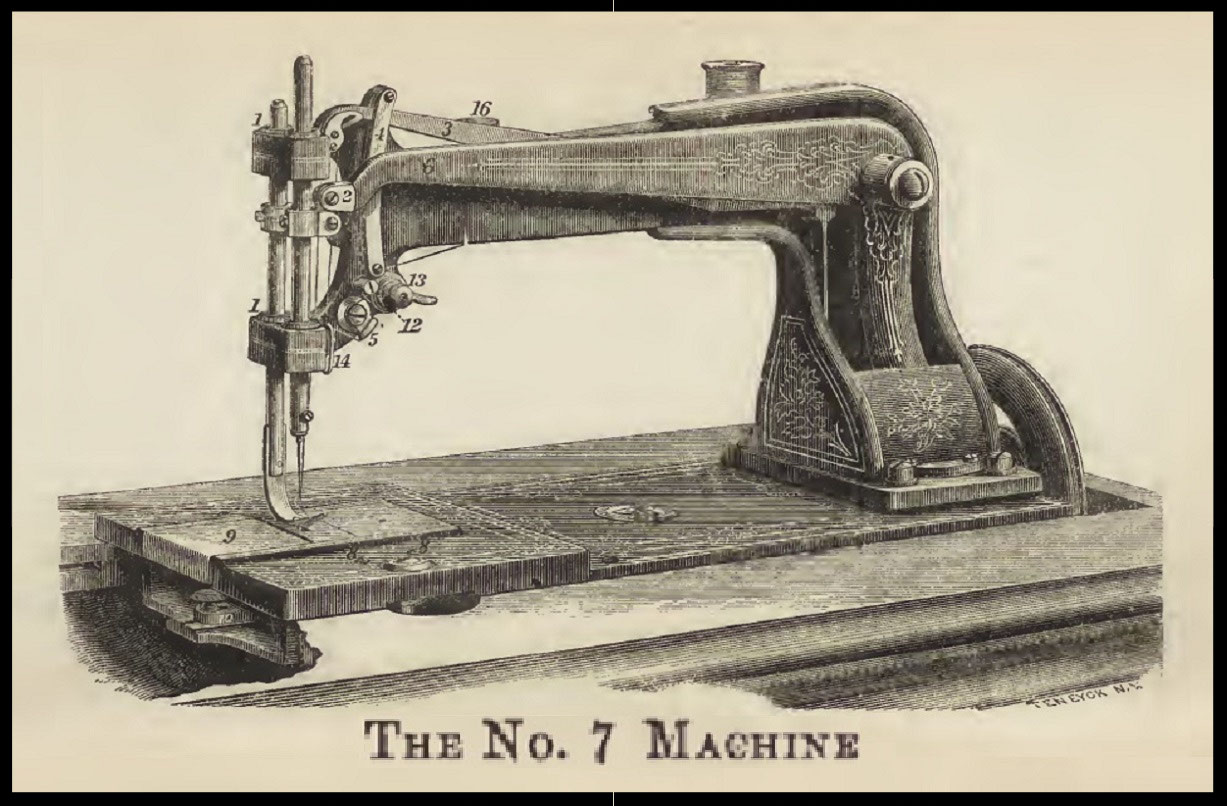 The Wheeler and Wilson domestic models 8, 9 and 9D used a unique 4 point case locking system, which was patented in 1879. Either a key or cranked lever operated 4 metal bars which slide out from the ends of the base to engage with the end plates of the case cover.

A London office was opened in 1859, at 13 Finsbury Place, followed a few years later by offices and showrooms in Regents Street. The Head Office was at Queen Victoria Street, London E.C. and by the 1880’s there were 26 other branches scattered around Britain. At the end of the century the UK Head Office was at 11 to 21 Paul Street, Finsbury, London.

With the decline in machine productions numbers, the Wheeler and Wilson Company was taken over by the Singer Manufacturing Company in 1905. Singer continued to manufacture the No.9 model, badging it as a Singer until after 1912. 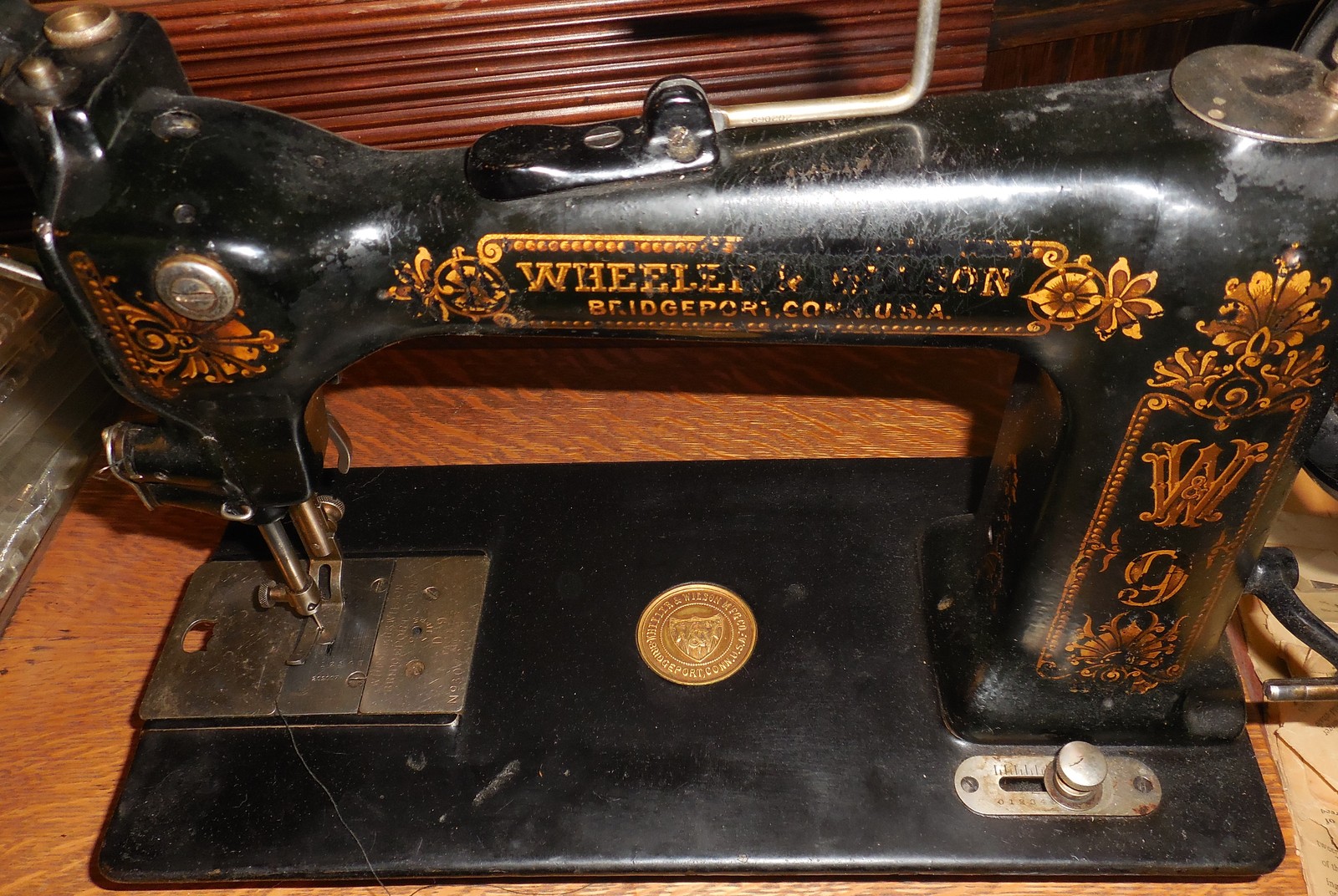 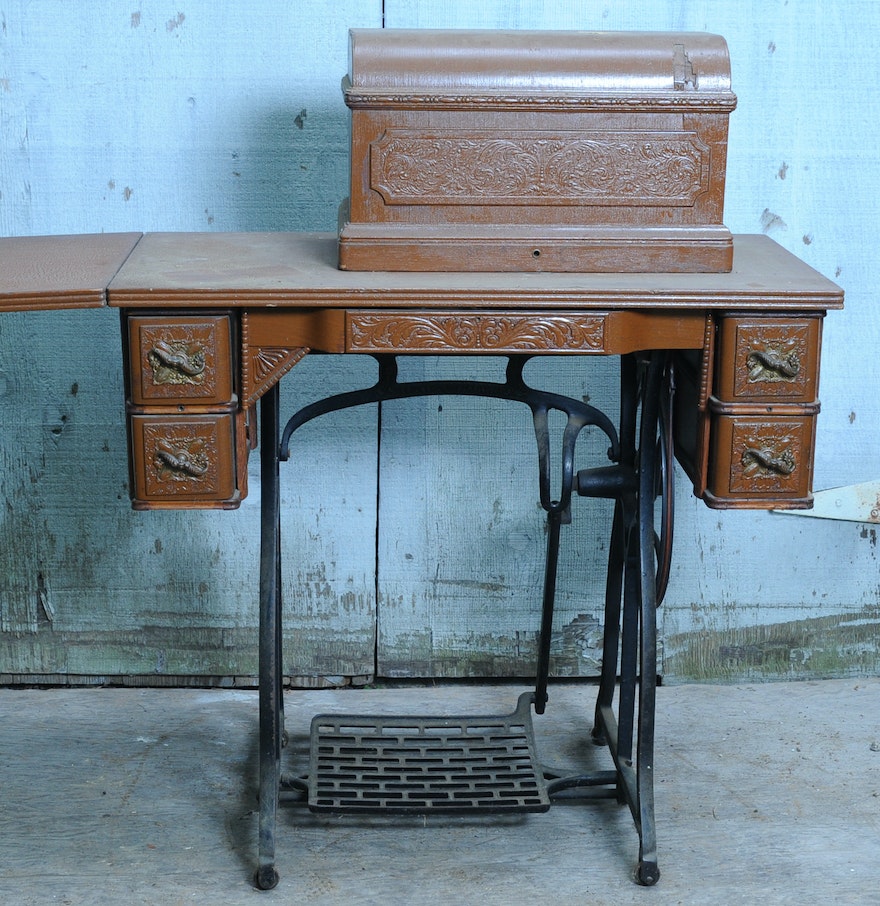